I arrived at the Delaware Water Gap and parked at the Dunfield  lot off I80. As I got out of my car, a sign caught my eye. Mt. Tammany trail. Now I had been looking at the profile of the “Indian,” on that mountain for over 50 years. I had to go up!

Problem was…I was in jeans and had no pack or water. My plan was to go up the AT for an hour and come back. A gradual climb…no problem.

Tammany was way different! Rocky and steep for an hour, I was informed by a pair of women hikers. They had packs, water, snacks and who know what else. “The way back is the tough part,” they said. “Coming down is tricky.”
Great.

So I made an adult decision and went up about 3/4 of the way, sweating, (too much clothing) resting, (to slow down my racing heart) and climbing. Stopped took some photos and descended. I’m getting smarter. There was a decade or three in my life where two women weren’t allowed to out do me. I was such n idiot, sometimes. Being out done now is just smart. Just plain smart.

I will go back prepared. Maybe later this week. At the top you can take another way down (blue trail) which is not so steep. Think that’s what I’ll do.

Anyway, it was a great morning. 🙂 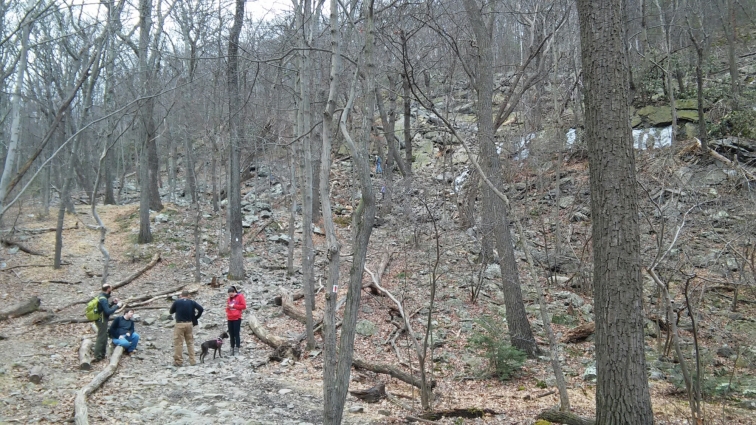 Then, on my way home I stopped at Noxamixon State Park and checked out the trails:

As you can see, mountain bikers hang out here. Nice trails. Not much climbing but good lake views. I think it may be hilly over by the dam.