HMMMM.  We part ways.  Them finishing the section and I just starting.  I gave it a little thought and kept walking.

There’s lots of time of think, you know, when you are walking 40 miles.  So, I thought and thought.  What shall my trail name be? “Gray Dawn” didn’t quite feel right.

When I was little my dad always called me “Skeet.”  I have no idea why.  I never asked him.  Maybe my brother knows.  Note to self:  Ask John. “Skeet” makes me feel young and alive and makes me think of my dad.  Yes, that should be my trail name.  “Skeet.” Done.

So I begin calling myself Skeet. (tired of all the parentheses) Each time I say it to myself I feel good.  Kind of cool.  Anything that makes me feel good at that point was cool.  I was hot, tired, in pain everywhere and needed a real toilet. Please, just one real toilet. One did show up later and two in the front yard of a house on my last day! Back to my trail name.

So, I like to start my sentences with so, I get home and am sitting talking with my wife Yolande and I bring up the first two guys I met.  I tell her that one of them, the first person I met on the trail, wanted to name me “Gray Dawn,” some famous dog.

She looks it up and sure enough Gray Dawn was indeed the name of a very handsome collie dog and character in a book by Albert Payson Terhune. 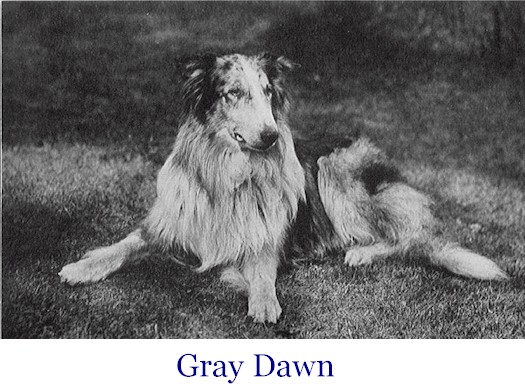 He was a show dog who never won the big prize but had a lot of personality.  He used to steal food for his puppies!

So now Gray Dawn is starting to sound pretty cool.

We go on Googleing.

“Gray Dawn” by Peter Peterson.  A New York Times article about the coming of Global Ageing!

“There’s an iceberg dead ahead. It’s called global
aging, and it threatens to bankrupt the great
powers. As the populations of the world’s leading
economies age and shrink, we will face
unprecedented political, economic, and moral
challenges. But we are woefully unprepared.
Now is the time to ring the alarm bell …”

Hmmm. I like the sound of that as well. Me, part of the changing demographic of the Trail. Seniors unite! The Gray Dawn is coming!

We Google some more.

“Grey Dawn” is the tenth episode in the seventh season and the 106th overall episode of the animated television series South Park. It originally aired on Comedy Central in the United States on November 5, 2003. In the episode, senior citizens are running over people in the city of South Park, causing them to lose their driver’s licenses. Soon, the AARP comes to help them, using weapons. In the end, Stan, Kyle, Cartman, and Kenny stop the senior citizens by cutting off their food supply.

South Park! They must have read the article in the Times and thought up the episode.  I love South Park. We used to watch it every evening.  EVERY evening, the reruns.  When it came out I was still teaching and too self righteous to watch anything that improper.  What a dope I was.  South Park is FUNNY!

That nailed it.  “Grey Dawn” or “Gray Dawn” if you like. I’m taking it. A cool dog, a New York Times article, or a South Park episode. My name has 3 stories behind it! That makes it triple cool… I’m still a dope.