Only BOOM could walk right past a shelter! If he had me on his shoulder instead of tucked in his pack, I could have stopped him! But, you know Doug, right?

Eye on the prize and all that. Just get to the finish line. You know, if he would listen to me once in a while, he might learn something. He has trouble smelling the roses. Goes right past the scenic overlooks, unless he’s with someone. About what is that?

Just after they started out, BOOM and Sherpa that is, bumped into to a couple of HS kids from Princeton NJ! (I heard them talking) They were on some kind of Spring Break and had hiked like 60 or 70 miles to this point and were headed home that day. I bet they had that Sunday night look on their faces!

But no, I can’t see. I’m still buried in this pack! OK, I’ll drop the resentment now and get on with the story…

Doug and “Sherpa” (His friend Scott), turned a corner and I could smell the fire and hear the rushing water.

Antietam Shelter, on an island! Surrounded by the stream. “Swan” and “Paul with the Bunyons” had set up camp for the night at 10AM! Paul said they were going to move the shelter to some other site for preservation. It was a very old one. They said it looked cool.

After some Trail talk, usually stories not to be believed, Paul luanches into his AT poem!

He’d been writing is for years! It was so cool, and funny! Paul had hiked over 10,000 miles on the Trail. I could hear BOOM thinking…. “Geez I’m only at 300!” I’m pretty sure Sherpa was recording it. I’ll see if I can get BOOM to upload it later.

After what sounded like a another magical Trail experience, off they went.

Oops. Off BOOM went. Sherpa had to head back to his car. He still works. Dentist he says. Believe him I do. (I should have done this all in Yoda talk. But these humans would have to think to hard, so I translate.)

BOOM started up a massive hill and met some guy from the US State department! He had a lovely Lab with some weird Norweigen name I can’t remember, and a walking stick from Uganda.

Doug liked the stick and then, of course, had to tell the guy he lived in Cape Town for 3 years. That’s like telling someone from Los Angeles that you lived in Chicago. I guess it’s an African thing for BOOM. He LOVES to talk about Africa.

The conversation started with what work they both did. “Paul,” Doug meets a lotta Paul’s, was about Doug’s age and ready for retirement. He was ready to leave Washington. Trump stress and all that.

Aligned they were. BOOM and Paul on the current surreal America.

I can’t tell you all the stuff they talked about. Classified it was. There was some really scary stuff about how our beloved country is being run. Really scary.

I can’t share it. I’d have to light saber you.

Doug almost passed out on that climb to Chimney Rock. Paul had done it many times. I wish he had taken some pictures. It was getting cold and foggy they said.

Paul told BOOM a story about two women he met up there at Chimney Rock. They were finishing the Trail in Duncannon, not too far north. One of them was 80 years young! BOOM snapped out of that sweaty,  feeling tired and sorry for himself attitude right then. His vibe changed. Conversation on the Trail does that for you. How cool. She was 80!

Paul had been hiking up that mountain for 15 years! I wish we had stayed and chatted longer. Paul was way more interesting than BOOM.

Lots of chunks of marble along here. Just like in Maryland.

By now, I’m trying to tell Doug that he missed the Tumbling Run Slelters, where we were camping for the night! He just kept going… 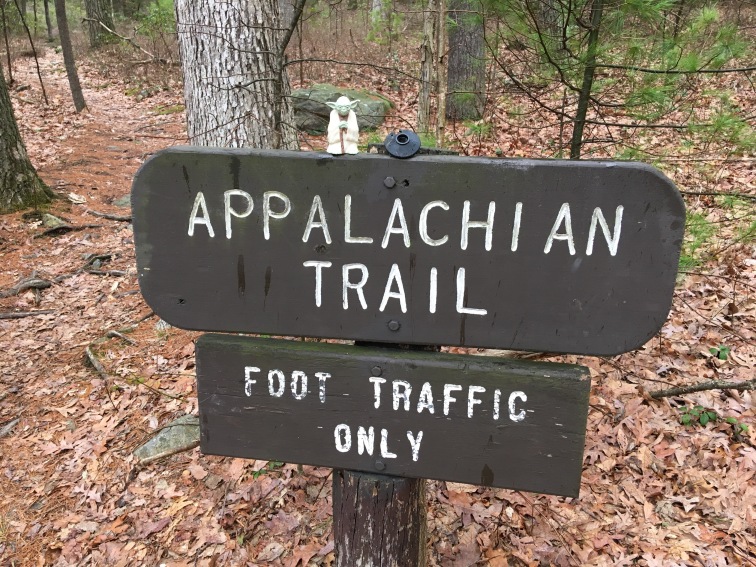 Finally! I’m out! He likes to put me on signs for some reason. Get it I don’t.

I tell him, “BOOM, missed the Shelter you did. Going back, we’re not. Hungry I am!”

So he checked his Guthook App finally. We were 1.2 miles from the car! Might as well finish now…

Some kind of bug was killing the Hemlocks. Sad. But… 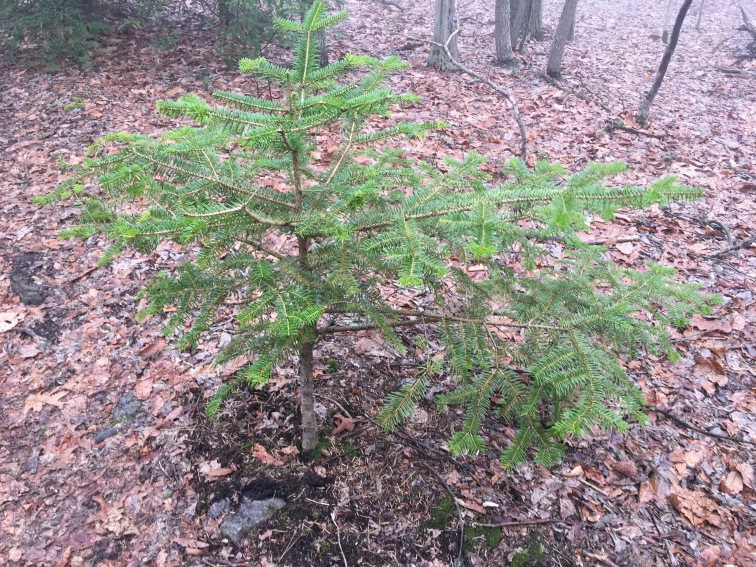 Spruce trees were coming up everywhere! See.  If you Earthlings would just let the planet be, it would heal itself. I don’t think you’ll ever understand that simple solution. 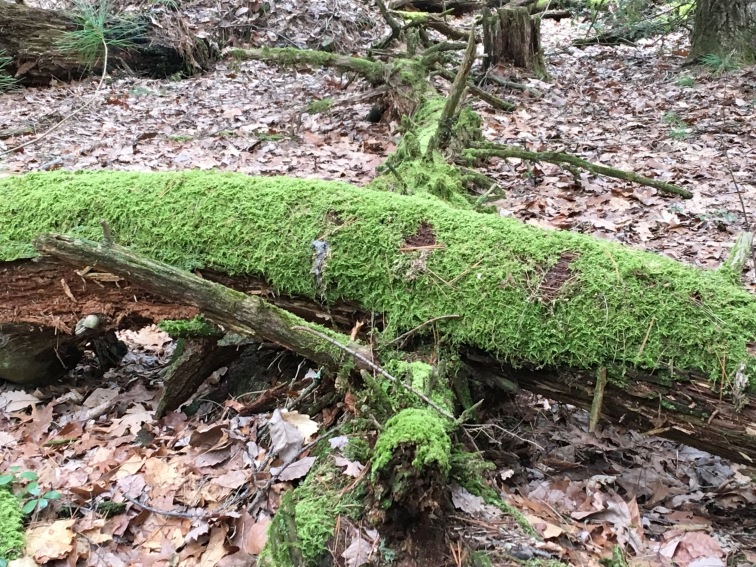 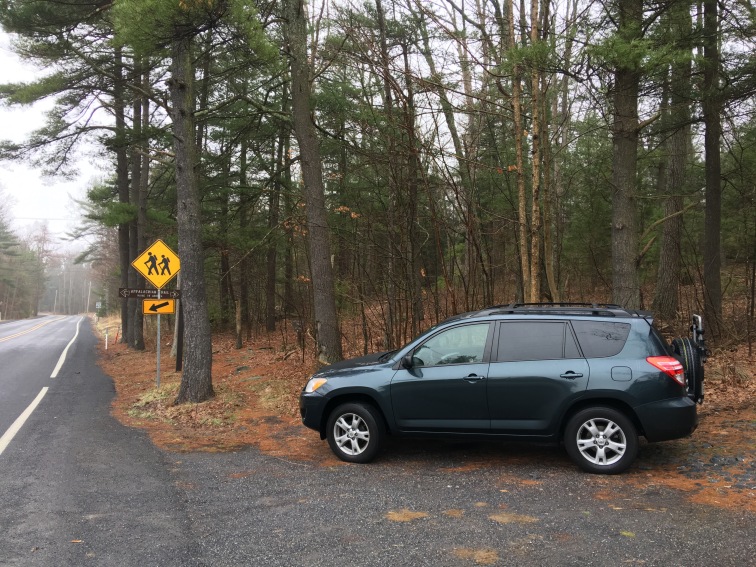 Back to the Rav. Shame. Sherpa could have come the entire 13 plus! BOOM felt bad. Thought there would be snow. Nope. Not a flake. He could not believe he walked right past the shelter! He blames this stuff on his ADHD. I think smell the roses he can not.

Back to the restaurant where Doug stopped early in the morning for some directions. He met “Junker” in there. Left me in the car for 23 minutes!

Junker helps run a Hostel down the road for Thru Hikers. Doug said they had a great talk. Get this. Junker has walked over 14,000 miles on the AT! 14,000! 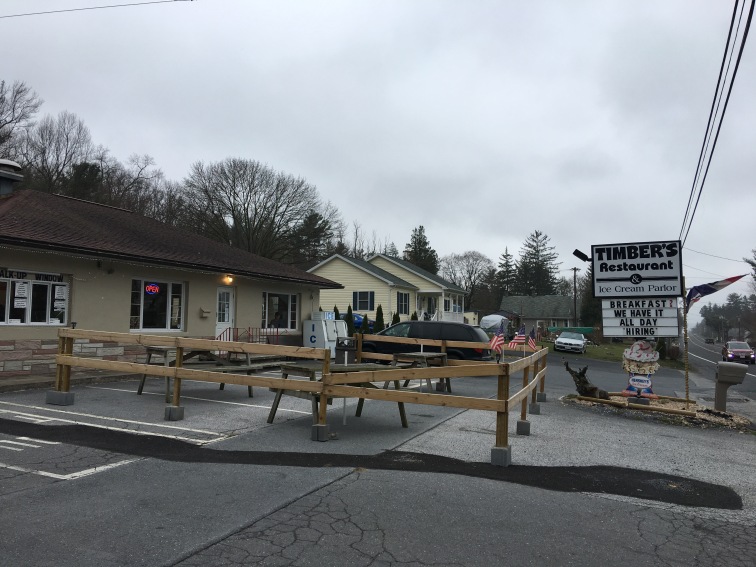 Timbers! We WILL go back there when we come back here next week to finish Pennsylvania. Friendly, inexpensive, tasty fare!

This is really why he came back… 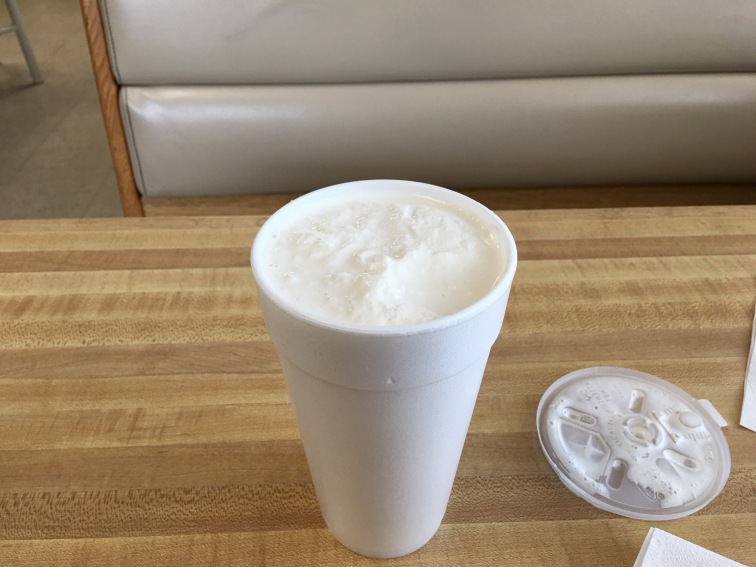 Boring. Vanilla milk shake. He seems to love them after hikes. Justification for that massive sweet tooth he has. Talk seriously we must about this.

If you look closely, you’ll see. Stuck me up on a sign again he did.

I told him, “Thank Sherpa again you must. Shuttled you he did. Carried your pack half way he did. Good friend he is.”