Well, my Trail Angel, George and his wife, Jeannie, dropped me off at Rt 22. This is the view I had as I started my trek. Directly behind me, although I had no idea, is the Train Station which drops off hikers from Manhattan! How cool is that!

Anyway, off I went. A little nervous having not hiked at all for two months. I had 19 miles to go with three climbs, the toughest of which would lead to the shelter I hoped to reach, about 10 miles away.  Ten is not far usually, but with my heavy winter pack, I knew it would be a challenge.

The two chairs in the first photo had “to Maine” and “to Georgia” carved in the backs! Nice touch, NY.

There was a pretty long stretch of bridges over marshland. These clubs do an amazing job of maintaining areas like this. It’s a real treat to walk these boards!

Through a patch of woods and then pasture and then this huge tree.

They call it the “Dover Oak.” Why? Nothing romantic. That’s Dover Road behind it.

Then I came to Nuclear Lake!

I know what you’re thinking. Why would I ever want to visit a place called Nuclear Lake? Well, let me set your mind at ease. The only reason it’s even called Nuclear Lake (you’re going to think this is so funny when you hear it), is that in 1972, a chemical explosion blew out two windows in the experimental nuclear research lab that used to sit on the shore of the lake, blasting an unspecified amount of bomb-grade plutonium across the lake and surrounding woods.

See? I bet you thought it was something bad.

Okay, so maybe it doesn’t sound that fantastic. But the trails around the lake were extensively tested, cleaned and declared safe many years ago, and who am I to argue with all those Geiger counters? I’m sure they dumped plenty of kitty litter and sawdust on top of that plutonium. To visit the place, you’d never know anything nuclear had ever happened at all.

A few miles later, I sat for a break and I hear, “Garrison Keillor.” I look up and two women are coming down the hill. “Matt Lauer, too!” Now I know what the conversation is about! I join in…”Garrison Keiller, really?” And we’re off! At least 10 minutes of commentary about the recent sexual harassment news. We hadn’t even said hello, and we were launched into debate. Friendly debate.

Sort of an amazing conversation, considering I have never seen these two in my life before today!
That is the state of the country these days. All the wrong topics mixed in with politics. These will be called “the Trump Years” one day.

Turns out, these are a couple more lovely New Yorkers!!! 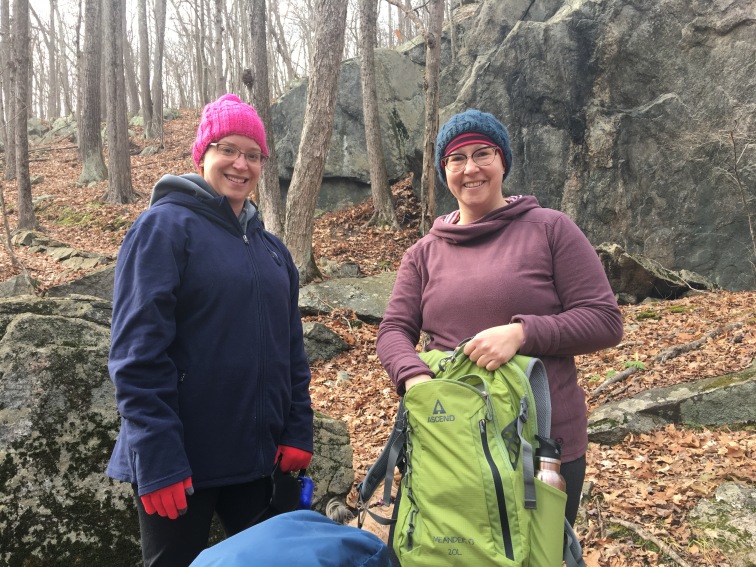 I WISH I COULD REMEMBER THEIR NAMES!!!!

I think one was Claire. Sorry! They had two great dogs with them. One a Yorkie and Chihuahua mix!

The person on the left’s boyfriend had thru hiked the trail. We had such a nice conversation about endorphins,  Trail Magic,  and the Trail  Days Celebration in Damascus, VA.

These two were a pair of seasoned hikers. The dogs, too!

I have met the best and nicest people in New York. I am now a big fan of the Empire State Appalachian Trail.

These two really lifted my spirits! Thanks! 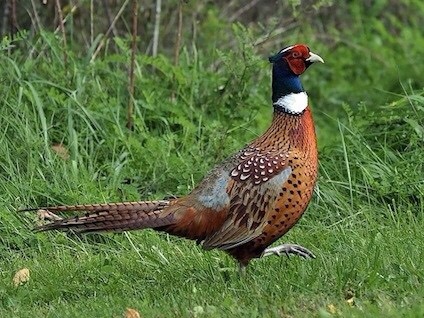 Then, I saw one of these! They were all over PA when I was a kid. We called them “Ring Neck Pheasants.” Turns out, that’s what they’re actually called! Too common a name for such a beautiful bird.

It was modeled after a design used in some of the PA Shelters.

Constructed indoors, disassembled, transported, and reassembled in site! Named after a beloved hiker who died during bypass surgery, it is at the top of Mount Edgar and sleeps six.

There were 6 hikers already there from the “Hudson Valley Hikers” group. The largest recreational hiking group on the trail. Something like 32,000 members!

I set up my tent on one of the many tent sites, I’m not much for shelter sleeping, cooked dinner, stashed my bear canister, and went to sleep!

I woke early, broke camp, and started the 4 miles left to my car.

What a spectacular morning. Sometimes not seeing the sunrise can be really beautiful.

It was an easy walk. Mostly downhill and across Rt I 84.

There’s nothing like spotting your car after a tough hike. Talk about endorphins!

Then down the hill for a GREAT breakfast sandwich! 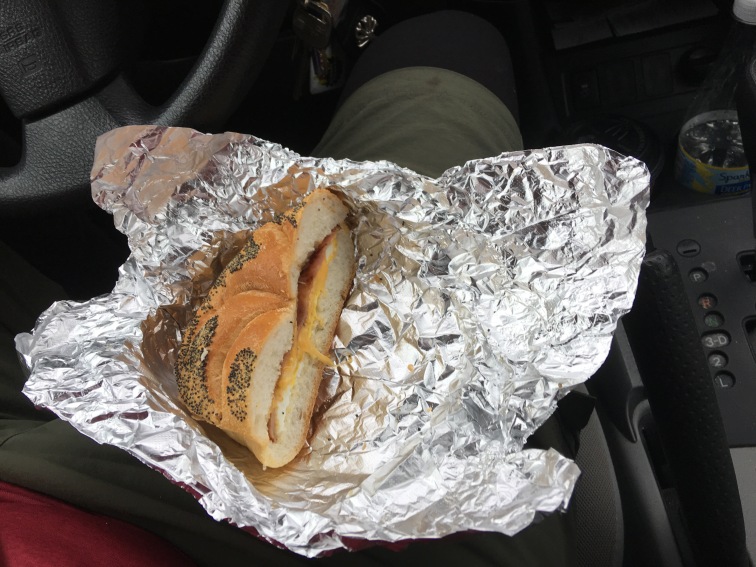 Another of the great delis on the NY AT. You could almost not pack any food through this state!

It was great to get back on the Trail. My legs are really sore today. It will take some hiking to get fit again.

Love it out there.

4 thoughts on “Back to New York”