I can’t say when I have had a better time on the Trail. This was my last stop while driving south, the Virginia Welcome Center, on Interstate 81. They were right. I loved Virginia! 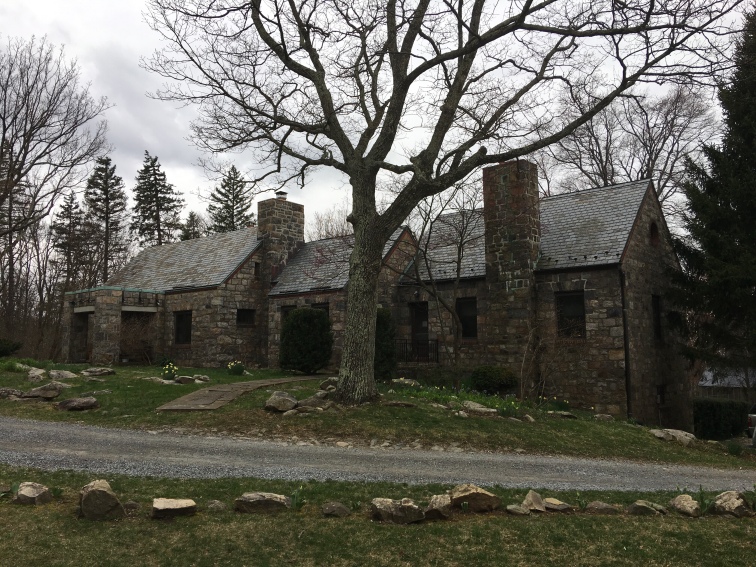 I parked my car at Rt 7, and walked a few miles and up the side trail to Bear’s Den Hostle. It was an old converted farmhouse which is now owned by the Conservancy. Beautiful. I couldn’t get in, they were closed!

This is the view at Bear’s Den Rocks opposite the Hostle.

This blog entry is going to be about the people. The hike was great, but the people were fantastic! I wish I had recorded the conversations.

I headed down the trail from Bear’s Den. The Redbuds were beginning to show. Yay Spring!

I got my tent set up at my first stop, Rod Hollow Shelter.

The spring was flowing! Lots of water on this trip. I’m always grateful for water.

Went down for water in the morning, and found my gloves!!! Honest hikers. Love them. 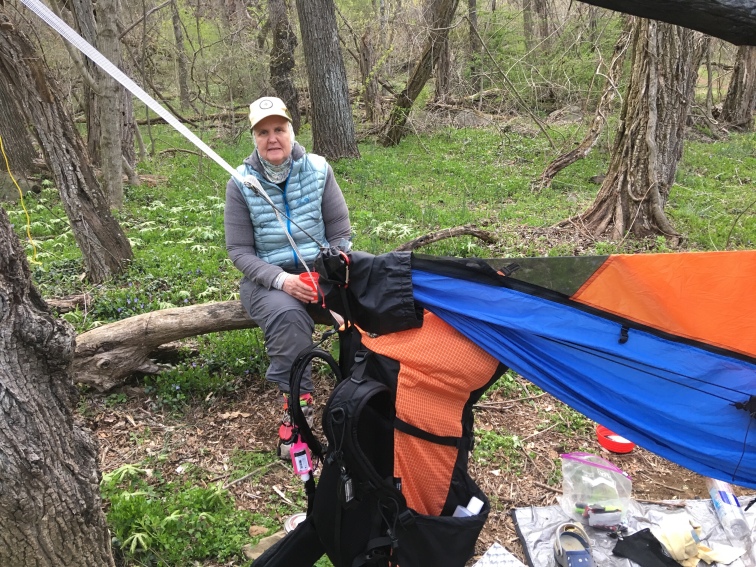 That’s “Wind Eagle.” Paula Martin. Look her up on her YouTube Channel. We had a lovely morning talk. She’s trying to raise a dollar a mile for mental health. Hiking for a cause. She had her dog along!

This couple is from San Antonio! Doing a bit of hiking this year in planning for next year’s Thru Hike. She is a small town doctor, trying not to feel guilty leaving her patients. We talked about how important we’re NOT. It’s ok to disappoint people sometimes. They will be all right.

Stacy!!! She wasn’t sure she would keep “Cruiser” as a Trail name. It was her first day back on the Trail after a serious injury stopped her Thru Hike last year, after 800 miles! First Day back! It felt like an honor to witness her return. It was an honor.

“No Point!” He’s an 18 year old, doing his Thru Hike this year, before college next year.

Just before we met, I was thinking about how much I never liked any of my trail names.

That’s my “All In” token, that was given to me as I left “Journey’s” church some months ago, with Sleeping Beauty. The sermon was about being “All In” with Christ. I’ve carried it every day since, along with my AA Green Card. (For my morning reading)

It felt right. I am an “All In” kind of guy. Always have been

I arrived, the next morning, at the point where I was to meet two of my old HS friends! John, who would hike the next two days with me, and Hardi, a retired Navy officer, who would shuttle us back here, after dropping John’s car at our destination. I hadn’t seen Hardi since 1968!

I recognized him immediately!

It was really good to catch up as we waited for John to arrive. So many shared memories from different perspectives. It was so great.

John did arrive and we went to lunch and I had the best Virginia Baked Ham and cheese sandwich of my life! Or maybe I was just really hungry:).

We said our goodbyes and off John and I went to the Jim and Polly Denton Shelter.

There we met “The Dude!!!!” Minister of the Church of the Latter Day Dudes. 😊

That’s him on the right.

He was really fun. Such charisma! A Gulf of Mexico oil rig diver from New Orleans!

I could write an entire blog entry on him.

I can’t remember the name of the middle one. The one on the far left, Aaron, was a friend of these two.

The two on the right, “No Peeky” and Iain. “No Peeky” was named by the Dude while he was changing behind the privy. Pretty cool to have a name given by THE DUDE!

John and I built a fire, got some sleep, and headed out.

We approached the the Tom Floyd Wayside, for a break.

John laid down and

fell asleep!!! We were both bushed after a very long uphill walk.

Refreshed, sort of, we headed out and

into the Shenandoah National Park!!! Cool!!!

Now. For about 3 days I had been hearing about the climb ahead of us, up to Skyline Drive.

Rain was due the next day, so John and I decided to press on and finish the hike early, both worried that the climb might be dangerous if wet.

Another really nice AT Hiker. She had thru hiked some years before, and was meeting some friends at the shelter.

Funny, she got down this horrendous climb ok.

THEN CAME THE CLIFF!

Oh my. These Virginians are really going to hate Pennsylvania!!!

The climb was a 2 out of 10. Ha. All that worry for naught. Wait until they climb out of the Lehigh Gap!

Another short bit and we were finished!

I was in my happy place:) my best Gary Busey impersonation!

It was late and I was tired.

John drove part way home, napped, and got home after 12.

Me, I slept in my car and drove home the next day.

It wasn’t much of an assault after all, just a great hike up and into the Shenandoah Park, finishing at Compton’s Gap.

Thanks John for coming along!!! Thanks Hardi for helping us get cars situated!!!

Next, back up to finish CT, finally!!!