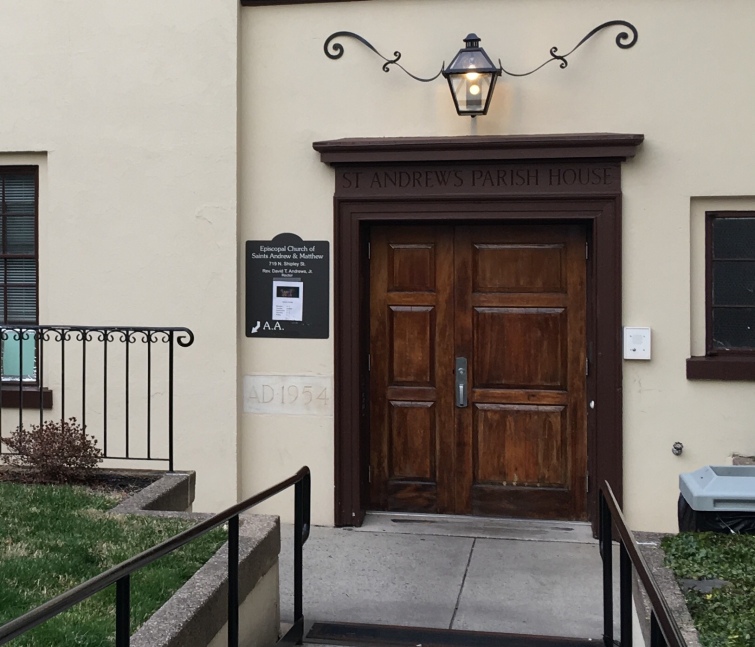 In the photo above, if you look closely, you’ll see an “AA” with an arrow, on the bottom if the sign, at the top of the stairs. Kind of cute.

It was dark when I arrived at the correct address for the meeting. Even now, after all these years, my pulse quickens when I find a new meeting. When I spotted that little AA with an arrow, it quickened AND, I smiled.

It meant I was “home” again in a church basement. 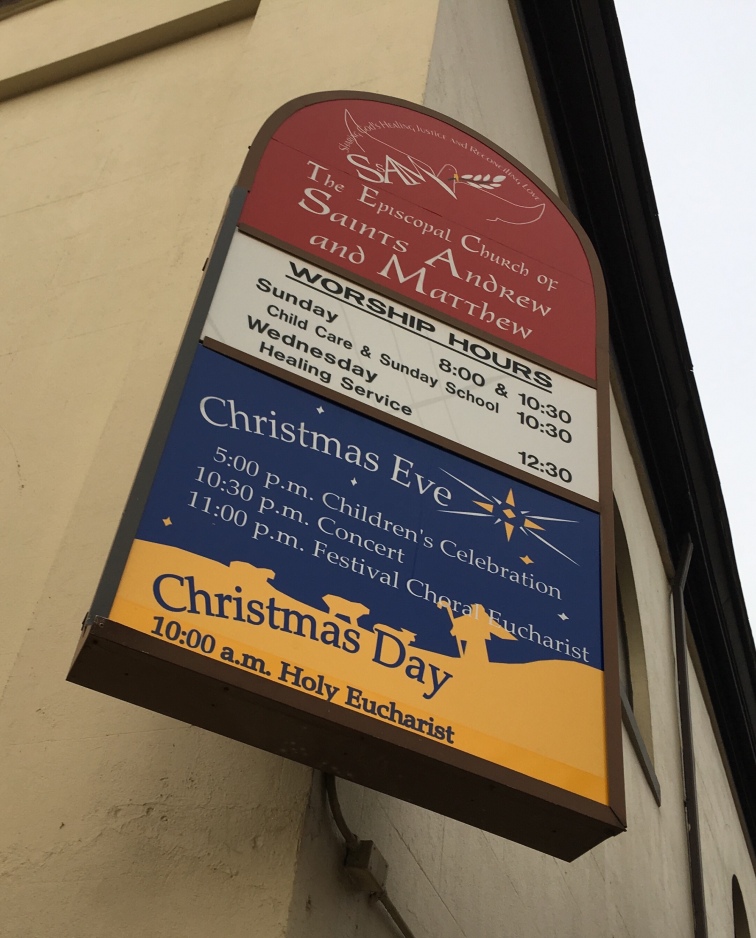 Anyway, I marched down the steps and opened the door at 6:55, to an empty room!

Lights on, coffee brewing, tables in a “T” laiden with AA literature. There was a door on the other side of the room, that could only lead to a toilet, that’s how almost all AA rooms are configured.

Nature was calling, so I went through the door to a clean (yay!) bathroom, did my business, (funny saying that) and came back into the meeting room.

I picked a seat near the front, sat and waited. A few minutes later, in the door walks a 6 foot 7 black man, with a big smile, in full Eagles fanwear. He was slim and friendly. “I’m Doug, I said. He said, “Hey man, I’m Billy!”

“Welcome,” said Billy and we were off. An AA Meeting had begun. “We start our meetings with a prayer,” he said. Now in my experience, lots of meetings start with a prayer. He came over to me, held my hands and prayed. That was a first. It was really nice. He prayed a prayer of Gratitude, for his sobriety, the gifts he has been given though God’s Grace, and for me! For me being there.

There was a time in my life where an intimate moment like that, especially a God moment, would have freaked me out! I felt my old self tense a bit, then my new self relaxed and became even more at home.

We carried on with all the AA rituals, the readings and such, sharing the duties. Then we just talked. Talked for about 30 minutes. Just the two of us. Like-minded strangers, both feeling the safety and belonging an AA meeting brings.

Then two young black women arrived. They were late because the bus schedule was on a Holiday schedule, being that it was New Year’s Eve.

Then I realized why the room was so deserted. It was in downtown Wilmington Delaware at 7 in the morning on New Year’s Eve! No one was working! The city was deserted. They sat down, and now we were 4.

The meeting was not in a good section of town. That never matters in AA. Lots of meetings are in rough city sections. It matters not. It is always the same. We come from “Yale to jail,” you see. Alcoholism does not discriminate. Not one bit, and we all feel the brotherhood of the rooms.

I had to leave at 8 to get back to the hotel for breakfast, so I said my good-byes and went out into the street. It was light out. Surprised me. The unexpected light lifted my spirits another notch. We’re past the Winter Solstice. The world is coming back to life. Love that.

I got a double shot of Gratitude. Two gifts. AA and the sun. I’m pretty sure I would have worshiped the sun a millimeum ago.

I got in my car, headed out, turned the corner to this. 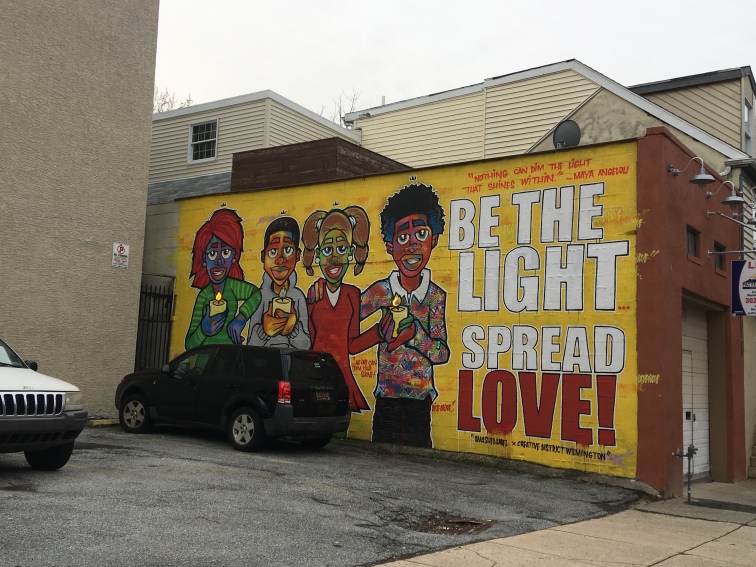 I drove past,?thought I should have taken a photo, drove around the block, and took a photo. I do that a lot. Go back and do things.

I love city art. Those candles being held were electrified and giving off a lovely flicker.

Four people, three candles. I wondered why. A family maybe? Whatever. It was another lift for me. Another little gift.

I have sure needed the gifts this last year. As I told a friend, I’ve been fighting off the blues a lot lately. It has been difficult, so I will take all the little Joys I can get.

Oh. Forgot to tell you. I’m in London at Heathrow! 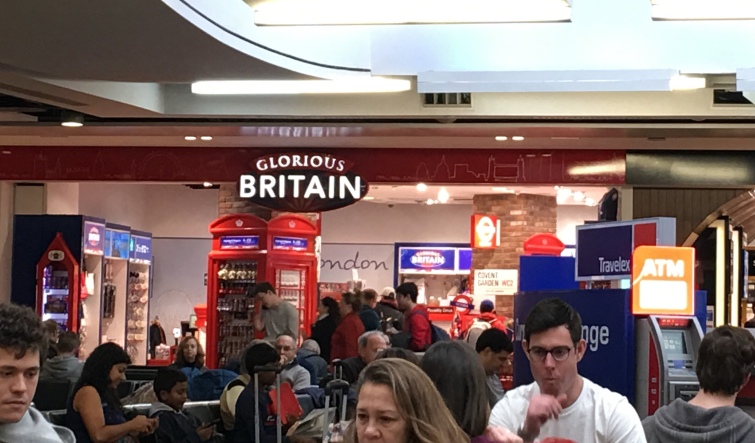 Changing flights on our way to Cape Town again. That’s a whole other story. Not now.