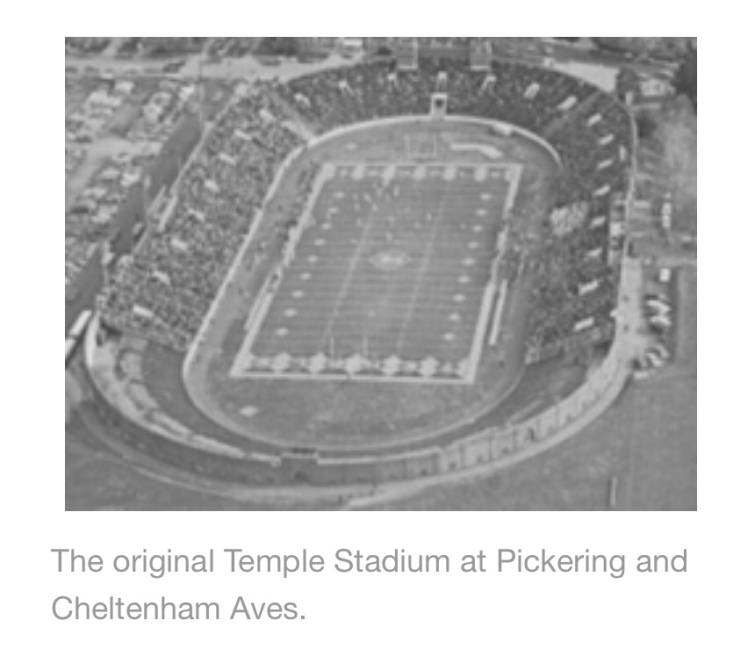 That’s the stadium we used when I played football for Temple University. It was just off Cheltenham Avenue. Now there is only a hole in the ground there.

I think it was 1970. We played West Virginia there and won, 39-36 on Paul Loughren’s punt return for a touchdown and Joe Injaychock’s intercept in the end zone as time ran out.

It was crazy exciting.

The stadium was sold out. There were something like 28,000 in attendance.

One end of the stadium was just grass. More seats could easily have been put there. If they raised the other 3 sides just a bit, 50,000 could have easily been the seating capacity. It was a GREAT place to play and watch football.

Yesterday, I was a Penn watching the Delaware Womens’ Tennis team. During a break, I walked over to Franklin Field. The University of Pennsylvania’s athletic stadium. It has a seating capacity of 52,593.

It is still there.

Temple plays football at Lincoln Financial Field. They had 20,000 in attendance when they beat Maryland last weekend. The stadium looked empty. It was depressing.

I went to a Temple-Penn State football game many years ago at Lincoln Financial. There were over 60,000 in attendance. 50,000 were Penn State fans. It was an away game for Temple in their home stadium.

There is a new stadium proposed to be built just off Broad Street on Temple’s main campus. It would be great. There would be more than just football played there. Maybe we could have an event like the Penn Relays. Concerts. The students could walk to the stadium.

It’s not going to happen. No one cares enough.

Temple wins games now. We had 3 winning seasons when I was there. They are better now. They contend against major college teams. A new stadium would push the program over the top.

Not going to happen.